Clue The Musical is a fun quirky musical based off the board game by the same name. The play features all seven characters from the board game with the addition of the detective character.


Clue the musical is directed by Robb Anthony Sisneros. Sisneros did a fabulous job blocking out each scene. The production is performed in the round. Meaning the audience surrounds the stage. One issue that often occurs with this configuration is the actors can’t face the audience all the time, so the audience often feels ignored. But in Clue The Musical, I never felt ignored. This is the perfect show to do In The Round because the actors are constantly engaged with the audience. The minimalistic set design by Michael and Wendie Cutcher also worked well to ensure there wouldn’t be any sight line issues.

The costume design by Shannon Scheffler added the perfect amount of color to the production. Scheffler was able to capture each character and bring them to life though there costumes. The acting was phenomenal as well. Each fitting there roles perfectly.

One thing that sets this musical apart from other musicals is you won’t find any of the songs stuck in your head after you watch it. In fact, I personally can’t tell you how any of the songs go. This is by no fault of MTS. The music was written by Galen Blum, Wayne  Barker, and Vinnie Martucci who were able to write music that was not memorable at all.

Over all, I think it was a fantastic show. I encourage anyone of any age to see it.
Posted by Kay Vatea at 9:49:00 AM No comments: 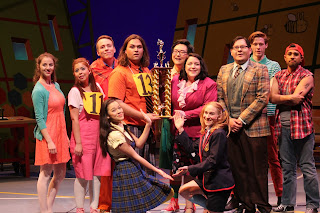 The 25th Annual Putnam County Spelling Bee is a fun musical about the struggles of being a child in an extremely competitive environment. The play is Directed by Kathleen Clawson and Choreographed by Donna Jewell.
An important element in this play is the audience volunteer participation. In each performance there are four audience members that are chosen to participate in the Spelling Bee. This makes for some hilarious situations, and it makes the show a little different each night.
Each individual member of the cast stands out to create memorable characters.   The only one that I didn’t feel stepped up to the plate was Josh Jones who played William Barfee. I feel like Jones was cast for his voice which show cases many of his talents, but he was the only cast member that was not convincing as a middle schooler.
The choreography is a fun twist. This play isn’t known for it’s dancing, but Clawson’s choice to add dance sequences Choreographed by Donna Jewell made for a fun and exciting show. Because of the energy the dancing provides to the performance, I feel that this is one of the better version of this play that I’ve seen.
The Set Design by Inseung Park and Costume Design by Kevin Thornburg worked perfectly to create a colorful, cartoony world.
Over all this show is just plane fun. I would suggest this play for anyone, even if you're not a regular theater goer. It’s fairly short for a musical only lasting 90 minutes. It’s also well paced leaving no dull moments. Because of some of the mature humor, parental guidance is suggested when bringing children.

Angels All Die is part of The University of New Mexico’s Linnell Festival of New Plays. The play was written by Denise Hinson and directed by Dan Rogers. Denise Hinson is currently in the Dramatic Writing MFA program at UNM. Dan Rogers is a guest director from Philadelphia.


Angels All Die takes place in a dressing room on the set of a soap opera, and tells the story of Frank the hair dresser who spends every waking moment haunted by James Dean’s ghost. Frank lands a job working on the hottest soap opera on television and assigned to the leading actress Petra. Chaos ensues when Frank tries to ignore James Dean to get closer to Petra.


This play is hilarious, and comedy is not easy to pull off. The relationship between the playwright, director and actors seemed to work perfectly. Hinson was able to write humor into every scene, and Rogers was able to recognize the comedy and block it into the action, and the actors were able to deliver it with expert timing. The comedy isn’t the only thing Hinson did well. The character arch for Frank and James Dean was perfect. They were able to learn and change with every situation. The acting was phenomenal, but the performance that stands out is from Drew Morrison who is able to bring James Dean to life on stage.
There were only a few issue to point out.  The play is performed in a black box theater with a thrust configuration. Because of this there are some sight line issues. The best place to sit would be either center stage or stage left. From stage right there are some set pieces that obstruct the view and I missed some of the jokes because I couldn’t see what was going on. There is also a radio on stage right to add some ambiance at the beginning, but the music was distracting from what was happening on stage. It’s hard to concentrate on dialogue when American Pie is playing in the background.


Over all Angels All Die is very well written and I encourage everyone to see it.

Chatterbox is part of The University of New Mexico’s Linnell Festival of New Plays. The play was written by Rebecca Sanchez and directed by Morgan Green.Rebecca Sanchez is currently in the Dramatic Writing MFA program at UNM. Morgan Green is a guest director from Brooklyn.

Chatterbox takes place in modern day Albuquerque New Mexico and features Valentina, a free spirited kindergarten teacher, and Marco, a literature analyst and college professor, and their relationship with one another. Sanchez does a good job addressing social issues and cultural situations in a light-hearted and also heart breaking way. The story is told through short vignette, each showing the different dynamics of their relationship. How their relationship works, how it doesn’t work, and how they make it work.

The scenic design by Zoe Bell and the costume design by Emilie Norris works well with the abstract form of storytelling. The blocking for the actors on the other hand didn’t work as well. For most of the play there was at least one actor that had his or her back to the audience. This seem less like an artistic choice and more like poor planning on the director's side. Green also adds a mix of realism and symbolism that didn’t seem to work in her favor. For instance, the actors are often seen eating real pastries and drinking real coffee, but when Valentina is the post to be baking cookies she spreads glitter all over herself instead. The journey from the real world into an abstract world then back again can get a little confusing. The writing isn’t perfect either. It’s difficult to tell why Valentina stays with Marco for so long when there are so many reasons to leave. Also, Marco’s character doesn’t ever change or learn.

Even with it’s flaws, I thoroughly enjoyed this play. The acting was phenomenal and the story was well told.